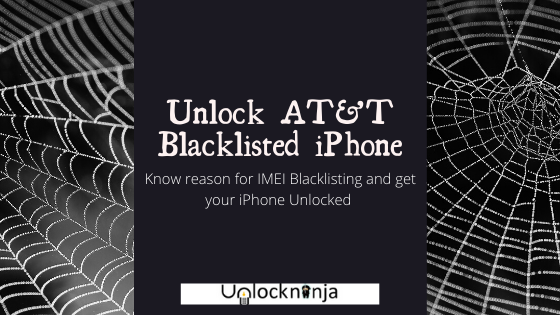 Similar to network locked Android phones, network locked iPhones can be unlocked to use any network. The procedure to unlock iPhone 7 AT&T or unlock iPhone 6 AT&T or other models of iPhone locked to any other network is also easy just like various Android phones locked to various network providers. Thus, it would be right to say that to unlock iPhone AT&T which is network locked is not a challenging task when the users hire phone unlocking services like Unlockninja to do the task. In contrast, things are different when the user wants to unlock blacklisted iPhone AT&T. Those who are confused between the network lock and blacklist or blocked status of the iPhone, it is primarily necessary to understand the difference.

A network lock on iPhone refers to restricting the device to use a SIM from any network provider (anywhere in the world) except for the home network provider. This type of network lock is imposed on the devices which are bought at discounted pricing on the agreement of using the given network for agreed tenure. Whereas, a phone is blocked or blacklisted by AT&T or any other network provider when the user has outstanding bills of the handsome amount. To discourage further dues, the network provider blocks/blacklists the devices of such users. In addition to this, the network providers like AT&T have the power to block or blacklist the iPhones when they are reported as lost or stolen. Whether it is a network lock or a blacklisted or blocked phone, both the types of phones can be unlocked legally to use and function normally through an online iPhone network unlocking service like Unlockninja. However, the procedure for both types of unlocking differs a bit.

Get your unlock codeUnlock Your AT&T Phone Now

Whether we talk of network unlocking iPhone or unlocking a blacklisted iPhone, there are many benefits of unlocking an iPhone. An unlocked device can be used with any network provider including its home network provider. Thereby, the users can enjoy the flexibility to switch between cost-effective network providers who can also offer wider network coverage at domestic and international locations. The increased resale value of the iPhone is the biggest advantage which the iPhone users can relish after unlocking their blocked or network locked device. After the unlock, the devices can be sold nationally or internationally at a better price. With so many benefits of unlocking, certainly, every user of a Network locked iPhone would like to seek unlocking services. Unlockininja can prove to be your one-stop-shop for reliable and prompt unlocking solutions.

After knowing the benefits of an unlocked iPhone, it is always advisable to check your IMEI Status before selling and buying a used iPhone or before ordering unlocking service. IMEI Status Check informs you whether your IMEI is clean, blocked or blacklisted, also sometimes the information like whether concerned IMEI can even be unlocked or not is very helpful. Once you have complete information regarding your IMEI, you are in a position to make an informed decision. To know more about IMEI Status Check click here.  At Unlockninja you can choose what information you want to know regarding your IMEI from the following services at a very nominal rate: